VISAKHAPATNAM: Visakhapatnam was the most liked place of Telugu actor, writer and theatre icon Gollapudi Maruti Rao, who passed away following illness at Chennai on Thursday at the age of 80. He has acted in over 250 films. People who are closely associated with him for the past two decades told TNIE that Gollapudi never missed an opportunity to visit the city. Gollapudi, who was born in Vizianagaram in 1939, completed his schooling at CBM High School and college education in AVN College and Andhra University in Visakhapatnam.

The acting bug bit Gollapudi when he was in college. He acted in the play ‘Snanala Gadi ‘ directed by the then AU registrar KV Gopala Swamy. Gollapudi was a multi-faceted personality and his death was a great loss to the literary circles of Visakhapatnam, Rasagna Vedika president Raghurama Rao said. He said Gollapudi’s teleserial ‘Vandella Kadhaku Vandanam’ was an experiment by Gollapudi who introduced rare native stories of Telugu to people as a part of the show. Gollapudi was not only a writer, critic and actor, but also a scholar, he said. “Every moment I spent with him was a great experience,” Rao said. 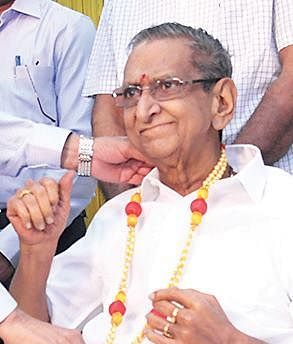 In April, Gollapudi ‘s visited Vizag for the last time. The occasion was his 80th birthday celebrations at Kalabharati. Gollapudi suffered a setback in his life when his youngest son Srinivas was washed away by strong sea currents during shooting of Prema Pusthakam. Srinivas was the director of the film and, after his death Maruti Rao directed the rest of them film. It was in his son’s memory that Gollapudi established Gollapudi Srinivas Memorial Foundation that gives away Gollapudi National Award every year. Among the recipients were actors Sunil Dutt, Naseeruddin Shah, Anupam Kher, directors, Mrinal Sen and Shyam Benegal, noted playwright Javed Akhtar among others.

Gollapudi had a good collection of books, which included Tyagaraja Keertanalu-Vivarana written by Kalluri Veerabhadra Satstry written in late 1940s. Gollapudi had strived to promote theatre throughout his life. Till his acting debut in the Telugu runaway hit film Intlo Ramayya Veedhilo Krishnayya, directed by  Kodi Ramakrishna, he was quite popular as a playwright and short story writer among literary circles.

Sharing his memories of Gollapudi, RSN Murthy, a representative of Visakha Humour Club, formed by Gollapudi along with actor Ravi Kondala Rao in 2000, said they have been supervising the club’s activities after Gollapudi shifted to Chennai. But he visited the city every year on Vinayaka Chavithi to participate in the club anniversary. Gollapudi gave good tips and suggestions to improve the skits presented by club members.

“I was quite young when I first watched ‘Kallu’ play written by Gollapudi in Vijayawada. I had to wait for 18 years to make a film with artistes from Vizag,” cinematographer and director MV Raghu said. He said ‘Kallu’ had won many national and State awards.

The play ‘Rendu Rella Aaru’ scripted by Gollapudi and staged by Vizianagaram Natak Parishad under the direction of Nataraj Kuppli Venkateswara Rao won the best skit award, star maker Satyanand said. He said he literally grew up watching the skits and plays written by Gollapudi.  Satyanand said Gollapudi’s journey as writer and style of narrating the story got him a chance in films.