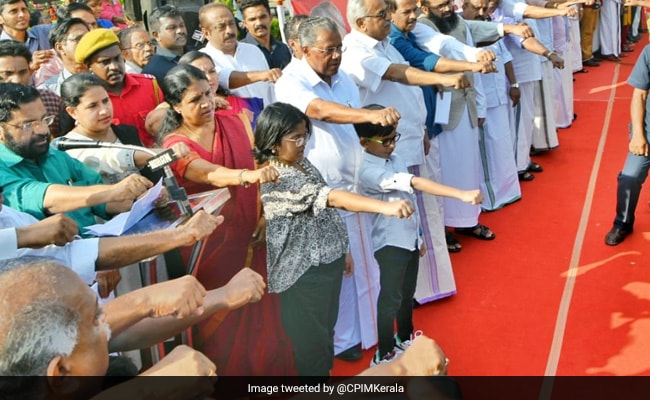 Chief Minister Pinarayi Vijayan, along with family members, stood in the chain in the state capital.

People formed a 620-km human chain from Kasargod in the north of Kerala to Thiruvananthapuram in the south to register their protest against the Citizenship Amendment Act on Republic Day. Organised by Kerala’s ruling Left Democratic Front, the protest saw lakhs of people — including Chief Minister Pinarayi Vijayan — lining up along roads across the state.

Neatly 70 lakh people turned up for the protest on Sunday, the Left said.

Several newly-weds were also seen participating in the protest, billed as one of the biggest against the amended Citizenship law until now.

Nothing more heartwarming than these photos from Kerala. The newly weds join #KeralaHumanChain, the protest to withdraw CAA&NRC. Salute to you guys for being the voice of resistance on the special day of your life. “Nation first, No discrimination based on religion” pic.twitter.com/9dvKkU7KGR

Pinarayi Vijayan, along with family members, stood in the chain at Palayam in the heart of the state capital.

While protest was led by the Left, it also saw people with opposing political views standing united in resistance against the controversial law.

“I believe I am here because it’s my duty to stand up for other citizens who are being sidelined on the basis of caste, creed or religion.This is our India and I stand united with everyone against the Citizenship Amendment Act,” actress Sangeetha Mohan said.

A Muslim woman, wearing a hijab, said: “We are not here for politics. It’s not about party. We will live and die here in India”. A man, next to her interrupted, “they are trying to scare us. We are all Indians, we are all humans. That’s why we  have joined the human chain”.

On December 31, Kerala passed an unanimous resolution in the state Assembly against the Citizenship Amendment Act, becoming the first state to urge the centre to repeal the law. Congress-ruled Punjab and Rajasthan are the other two states to have passed such a resolution.

This morning, the constitution of India was read out in several mosques and churches in the state, which also saw hoisting of the national flag and prayers being offered for the nation.

The Left and Congress led United Democratic Front, though principal political opponents, have also held a joint protest against the Act last year. The state has already declared that it will not implement the National Population Register.

“I congratulate all people who have joined this human chain. It’s not time for us to stop or to rest. We have to continue to resist all attempts to change our constitution”, Kerala Chief Minister Pinarayi Vijayan said.

The last time the LDF organised a similar human chain was on December 29, 2016, to protest against the hardships faced by the people following demonetisation.

On January 1, 2019, the Pinarayi Vijayan-led government held a Women’s Wall to uphold renaissance values and gender equality in society, with the aim of welcoming the Supreme Court’s decision to open the Sabarimala temple to women of all ages.

(With inputs from Agencies)

Sun Jan 26 , 2020
Mild tremors were felt in some parts of Krishna and Guntur districts, including some areas in the Amaravati capital region in the State, in the small hours of Sunday. According to sources, tremors were reported in Jaggaiahpet and Nandigama areas in Krishna district around 2.37 a.m. People panicked in Guntur […]