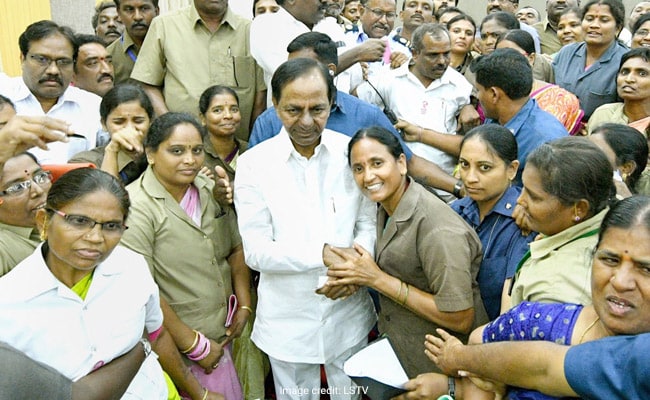 Telangana Chief Minister KCR made the statement while addressing a group of transport staff.

Telangana Chief Minister K Chandrashekar Rao, reacting to the gang-rape and murder of a 26-year-old veterinarian, made a potentially controversial statement by saying that women employees of the state transport body should not be made to work at night as a safety measure.

Reacting for the first time, Mr Rao or KCR, as he is popularly known, described the incident as inhuman.

“Just the other day, a lady doctor was killed. Are they humans? They are animals. So I am saying, let the women RTC (Road Transport Corportion) employees not be put on night duty,” the Chief Minister said in Telugu. He said this while addressing a group of state transport employees at his official residence-cum-camp office in Hyderabad on Sunday. The workers had recently called off their 55-day strike.

Women employees in several sectors, including the IT sector, have often said that doing away with night shifts for women is regressive, arguing that such moves will further shrink the space for women at workplaces.

KCR also said that a fast-track court will hear the veterinarian’s case and ensure justice is expedited. Expressing “deep anguish” at the ”ghastly” incident, KCR said his government was ready to extend all necessary help to the family of the woman.

The Chief Minister’s reaction to the crime came three days after the incident, amid mounting pressure on the state authorities. The gang-rape and murder has provoked a massive outpouring of anger across the country and protests in Telangana.

His son, minister KT Rama Rao or KTR appealed to Prime Minister Narendra Modi to amend laws to ensure capital punishment for rapists without any delay.

The young woman was assaulted allegedly by four men near Hyderabad on Wednesday night. The men dragged her into the bushes near a toll booth and took turns to rape her till she fell unconscious, the police said. They switched off her phone and poured whiskey in her mouth to silence her. Later, they strangled her, wrapped her body in a blanket and set it on fire under a bridge 27 km away.

Mon Dec 2 , 2019
By Express News Service SRIKAKULAM: An engineering student was allegedly assaulted by a group of four men after she resisted their sexual advances in Rajam town of Srikakulam district of Andhra Pradesh on Sunday night. According to police, the 19-year-old girl was pursuing B Tech second year in a private college […]