He was speaking at a review meeting on Spandana on Tuesday. 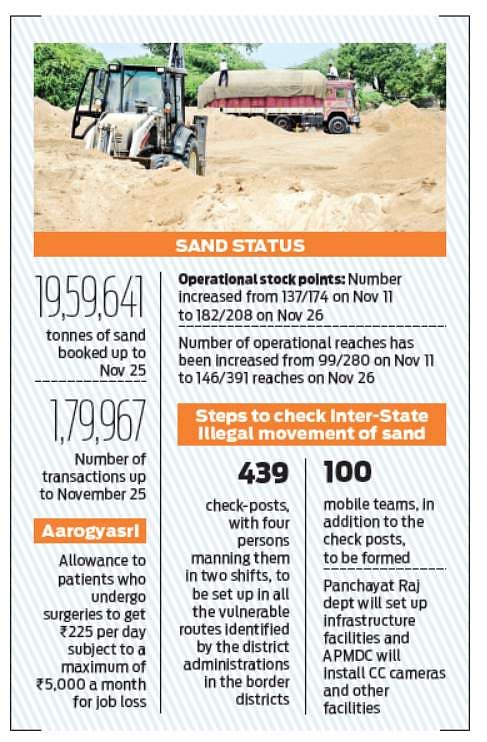 He wanted the list of beneficiaries be displayed at the village and ward secretariats from December 15 to 18 for social audit before displaying the final list on December 20.  The new cards will be printed and distributed from January 1.

The district collectors were directed to pay special attention in preparing the list of beneficiaries for YSR Pension Kanuka, Rs 10,000 aid per month to sickcell anemia, thalassemia, hemophilia, and Rs 5,000 per month to elephantiasis, paralysis, muscular dystrophy and chronic kidney disease.

The chief minister directed the officials to take measures for ensuring a result in 15 to 30 days on the complaints received on the call centre 14400, the Helpline Number launched to enable people to file complaints related to graft in government offices.

Officials were also asked to relax the norms for issuing SADAREM certificates and issue certificates twice a week from 52 SADAREM centres from December 3, International Day of Disabled Persons.

SADAREM camps should be held at CHCs once a week from December 15. The Chief Minister made it clear that all the staff should be courteous and sincere while receiving petitions during Spandana programme.

Jagan asked the officials concerned to complete payments to 2.14 lakh farmers under Rythu Bharosa in the next week.

As on date, 45.82 lakh farmers have been paid. He asked the officials to open workshops near village secretariats and distribute seeds and fertilisers after testing them at those workshops.  Agriculture department officials told to ensure there are no lapses in paddy procurement.

Beneficiaries registration under YSR Matsyakara Bharosa will continue till December 15. Officials informed the CM that 73,594 beneficiaries have been identified for YSR Nethanna Nestham to be launched on December 21. Under the scheme, Rs 24,000 will be paid as financial aid to the beneficiaries.

As many as 22.7 lakh beneficiaries were identified under the housing scheme to be launched on Ugadi. Officials were also asked to prepare a list of outsourcing employees for payments through Outsourcing Corporation by December 15.

District SPs and Excise departments were asked to ensure no liquor smuggling across the State borders. Officials were also asked to complete the distribution of cheques for AgriGold victims by the next review meeting on Spandana.

YSR Aarogyasri will be launched on December 1, the Chief Minister said.

Wed Nov 27 , 2019
By Express News Service VIJAYAWADA: The State government on Tuesday issued a Government Order amending certain clauses in GO Ms No. 96 issued on September 19, 2019 for the implementation of YSR Rythu Bharosa scheme. As per the GO 113, issued by the Department of Agriculture, the amendments include replacing the […]