VIJAYAWADA: Temperatures across Andhra Pradesh shot up on Thursday, prompting the State Disaster Management Authority (SDMA) to issue a heatwave warning across the State. District administrations have been put on high alert in view of a heatwave warning issued by the India Meteorological Department (IMD) for the next four days.

Daytime temperatures on Thursday hovered between 43 and 46 degree Celsius. The highest — 46 degree Celsius  —was recorded in Vijayawada, which was 4.9 degree Celsius hotter than normal.
A 47-year-old migrant worker, who was walking from Tamil Nadu towards West Bengal, collapsed and died near Atkuru, suspectedly due to a heatstroke. Officials, however, have not confirmed the cause of death. At Bapatla and Jangamaheswarapuram in Guntur district, mercury touched 45.6 and 45.4 degree Celsius respectively. As many as seven places in the State witnessed temperatures above the 44-degree mark on Thursday.

The SDMA warned that from May 22 to 25, daytime temperatures will fluctuate between 43 and 48 degree Celsius, and advised people to stay indoors. “The sudden spurt in temperature can be attributed to Cyclone Amphan as it sucked away the moisture in the air, reducing humidity, resulting in the rise in temperature. Further, the North Westerlies from North India are also responsible,” IMD-Amaravati head (weather forecasting) K Nagaratna told TNIE. 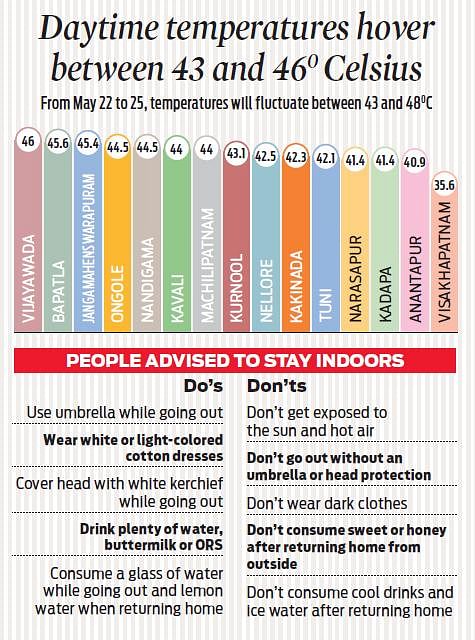 On Sunday, the intensity of heatwave is expected to decrease slightly compared to the previous day and hover between 44 and 46 degree C in Vizinagaram, Visakhapatnam, Krishna, Guntur, Prakasam, and Nellore districts while it will be between 42 and 43 degree C in East Godavari, West Godavari, and Chittoor districts. Disaster management commissioner K Kanna Babu directed APSDMA officials to be on high alert and asked the district authorities to take steps for providing shelters, drinking water kiosks, health camps with emergency medicine to mitigate heatwave effect.