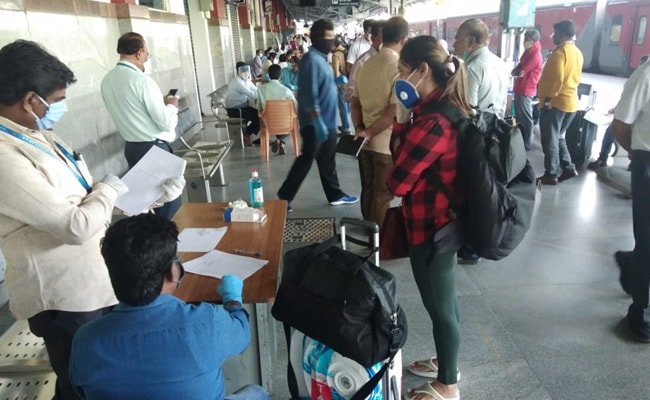 Some passengers were sent back on the same train on its return journey.

The very first passenger train from Delhi to Bengaluru since the beginning of the nationwide lockdown reached the southern city on Thursday morning. But soon there were arguments and chaos as many of the over 800 passengers refused to go into quarantine. Ultimately – many decided to go back – and an extra carriage was attached to the evening’s Rajdhani Express.

D Roopa, a senior officer of the Railways Police, told NDTV, “About 800 people arrived. Around 550 adhered to the policy decision of government of Karnataka to quarantine them. The quarantine has been free in government hostels and big Kalyana Mantapas organised by the BBMP. Those who don’t want this can pay a reasonable amount.”

She said around 150 passengers, however, were adamant about not staying at the government-mandated isolation facilities. Finally, by the evening, at least 45 passengers decided to head right back up north rather than go into quarantine.

“We talked to them for several hours and finally they requested me that they be sent back from where they came. Finally General Manager of South Western Railway intervened and an added bogey has been attached now to the Rajdhani Express leaving this evening. The passengers have agreed to pay themselves for this,” D Roopa said.

But for the Karnataka government, concerned about a rise in cases, the quarantine was compulsory except for a very few.

Dr K Sudhakar, Medical Education Minister, told NDTV, “Of course, there are some riders to it. Those above 80 are strictly home quarantined. Pregnant women who need constant monitoring – they can avail home quarantine also. Strict surveillance is maintained. Unaccompanied children can stay in their home in quarantine. Every rule has an exception.”

On arrival in Bengaluru in the morning, the passengers had to report to 10 medical booths set up in the scrubbed and sanitised station. COVID-19 19 testing was done on arrival and will be done again after 14 days.