VIJAYAWADA: Chief Minister YS Jagan Mohan Reddy on Sunday locked horns with the State Election Commission (SEC) after it put the local body poll process on hold for six weeks, ostensibly due to the COVID-19 outbreak.

He criticised the panel for making its announcement without consulting health department officials, and recommending the transfer of Collectors and Superintendents of Police though it decided to defer the elections. Jagan further lodged a complaint with the Governor against the SEC’s decision.

Hours after State Election Commissioner Nimmagadda Ramesh Kumar said the polls would be deferred, Jagan rushed to the Raj Bhavan and had a one-on-one discussion with Governor Biswabhusan Harichandan about the SEC’s decision and the State’s preparedness to deal with COVID-19.

Sources said the Advocate General joined the meeting for a while. 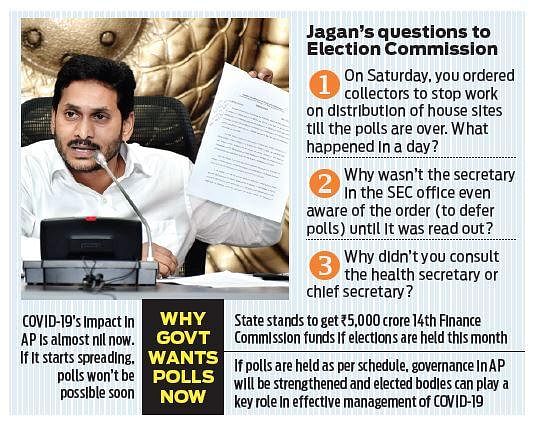 Speaking to the media later, Jagan emphasised the State’s preparedness for the coronavirus outbreak, and cited statistics on the number of deaths it has caused. There is no need to panic as only people above the age of 60 years who have diabetes, high blood pressure, kidney ailments, asthma and other complications are falling prey to the virus, he said.

“But for 80 per cent of people, it comes and goes. Medication too is simple; paracetamol is one of the medicines being used,” he said, but added that the government is taking all steps to contain the spread of the virus. Jagan further said that in 80.9 per cent of cases, people recover at home.

“Only 13.8 per cent of infectees need to be hospitalised, and 4.7 per cent need to be treated in the ICU. In China, people were put in a stadium and treated,” he said.

All possible steps are being taken to ensure no one is inconvenienced, Jagan said, adding that soon, countries badly affected by COVID-19, like some in the middle-east, would deport people who do petty jobs there.

“In the next month or six weeks, deportations will begin as they can’t afford the medical bills of our people. When they arrive, there will be screening at airports, home isolation, monitoring, and if they complain of fever, we will shift them to district hospitals. It is a continuous process. There is no need to panic, and we can’t say the situation will improve within two weeks.

It’s going to be a continuous process for a year,” he asserted and added that avoiding public gatherings and taking precautions during travel would continue for a year. Jagan also indicated that holidays would be declared for schools and colleges, but examinations would go on as usual. “Life will not come to a halt,” he stated.

Detailing his government’s decisions, including setting up of isolation wards, super-speciality wards and other facilities to curb the spread of COVID-10, Jagan said six isolation rooms will be set up at Visakhapatnam, Kurnool, Guntur, Kakinada, Vijayawada and Nellore from Monday.

Lashing out at the SEC, Jagan said Nimagadda Ramesh Kumar was appointed by the previous Chandrababu Naidu government and belongs to the same community as Naidu.

“The basic qualification of an SEC should be to act in an impartial manner. Ramesh Kumar has not just lost this qualification but also his discretion. An officer should act above caste, region and religion to uphold the dignity of the post,” Jagan said.

“Ramesh Kumar cited coronavirus as a reason to halt the elections. But in the same press meet, he recommended the transfer of Guntur and Chittoor SPs and collectors and suspended some other officials. Can anyone do that? When the Model Code of Conduct (MCC) is in force, you can do whatever you want. But how can you postpone the elections indefinitely and at the same time transfer officials?” he asked.

Stating that he is leading an elected government after winning 151 of 175 seats in the Assembly, Jagan asked whether the CM or the SEC should hold power.

“Complete the elections in 10 days and we will stay silent. You are postponing the polls citing your discretionary powers, and transferring officials and issuing memos to district collectors. Can such rights be given and taken? What is the need for democracy and a government then? The SEC can run the State in that case,’’ he fumed.

Referring to the SEC order, which said the decision was taken after receiving inputs from senior health officials of the state, Jagan said neither the Principal Secretary (Health) or the Chief Secretary were consulted. Jagan also criticised Opposition leader N Chandrababu Naidu for trying to stall development in the State.