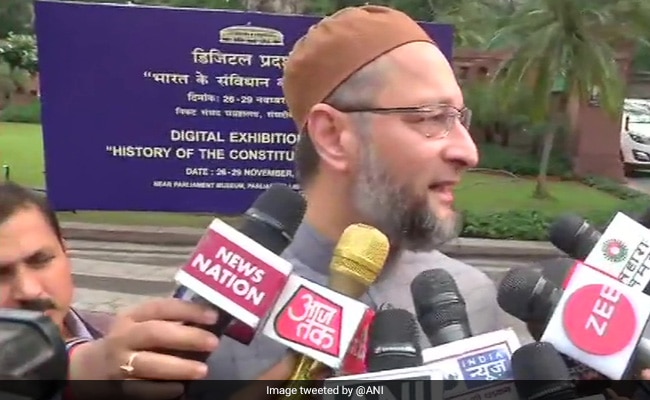 AIMIM chief Asaduddin Owaisi reacted to the killing of the rape-accused in Telangana.

Asaduddin Owaisi, an ally of the ruling TRS in Telangana, has said that he was personally against all types of encounters. The AIMIM chief ‘s reaction comes after the killing of the four accused in the gang-rape and murder of a young veterinarian in the state.

“As far as encounters are considered, I am personally against every type of encounter. Even the National Human Rights Commission (NHRC) has taken cognizance of the encounter,” Mr Owaisi told news agency ANI.

“I am hopeful that when the ministerial inquiry is conducted, then we know the full details,” he added.

Questions were raised on Friday’s pre-dawn firing in which four men accused in the gang-rape and murder of the woman in Telangana were shot dead.

The men had attacked the police and snatched weapons when they were taken to the crime spot for investigations, Cyberabad police chief VC Sajjanar said. He also claimed all four had confessed.

“We had to fire in retaliation after the accused started hitting us with stones and sharp objects and snatched our weapons,” he said. “The law has done its duty. That’s all I can say,” the officer said to doubts raised on police claims.

The accused, Mohammed Arif (26), Jollu Shiva (20), Jollu Naveen (20) and Chintakunta Chennakeshavulu (20), had been taken to the scene of the crime around 5.45 am for a reconstruction around the same time the woman had been raped and killed last week, the police said.

Several celebrities and even politicians have praised the police but many sounded caution.

Fri Dec 6 , 2019
YSRCP MLA Alla Ramakrishna Reddy filed a Public Interest Litigation (PIL) petition in the High Court against the allotment of 3.65 acres of land for the construction of the TDP’s central office on the ground that it was not in accordance with norms. Mr. Reddy informed the court that the […]